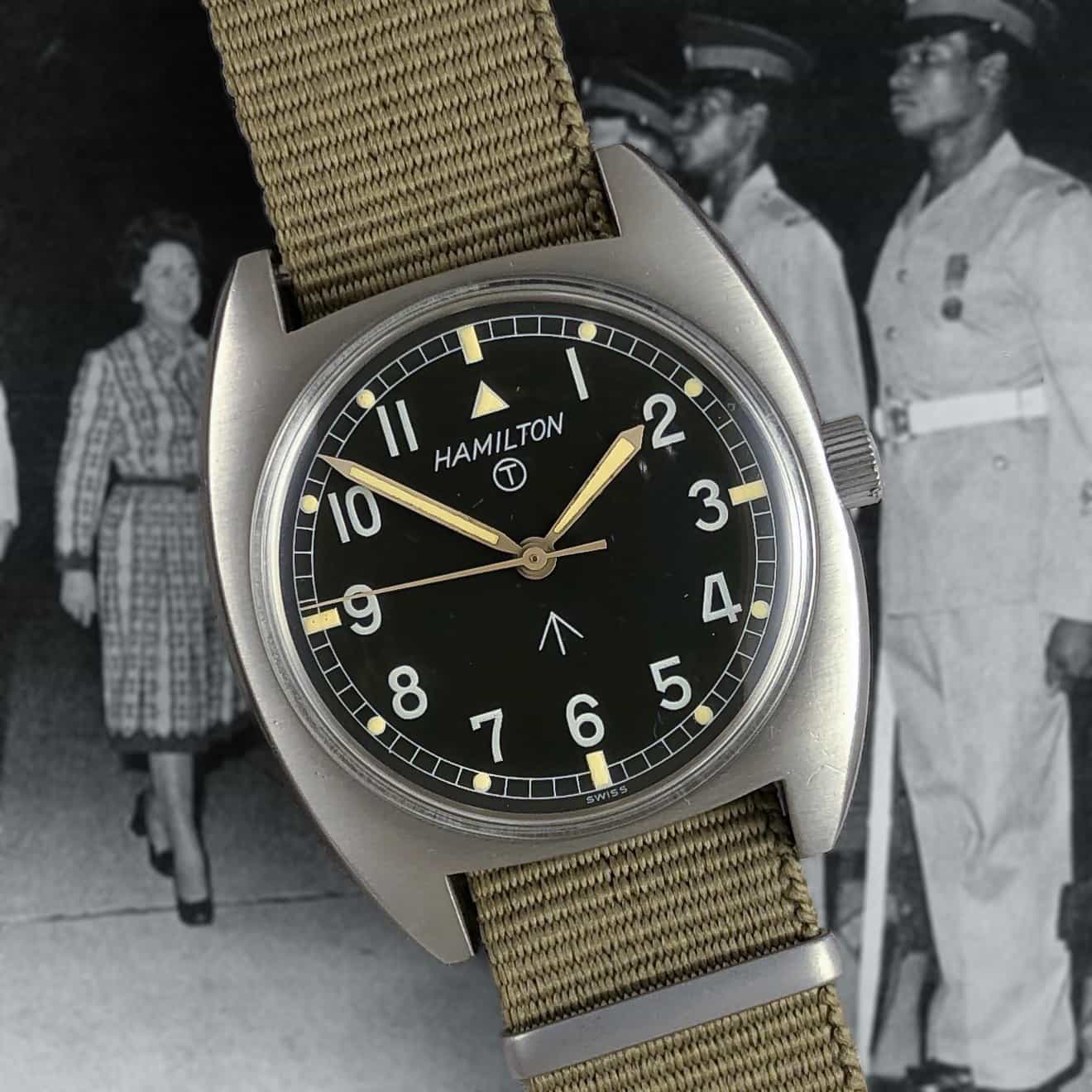 Hamilton had military contracts with, not only the American government, but also the British Ministry of Defense. In 1973, they made this wonderful Hamilton W-10, seventeen jewel, mechanical watch with "Hacking Seconds." This is a device that interrupts the motion of the balance wheel when you pull out the crown, thereby stopping the timekeeping ability of the watch. Once the signal is given to "synchronize your watches soldiers," everyone would push in the crown on their watches to instantly start-up at the same second so that the maneuvers could be coordinated with split-second accuracy. This particular watch came from the Ministry of Defense in Britain, after the Falklands adventure, when they were switching over to quartz watches. It had been kept in storage for the last 40 years. So, it has not been used or abused since that time. We have had our head watchmaker put it in excellent running condition, so that it will be ready for your next adventure. These watches were designed with a very robust, stainless steel case in a matte finish that is non-reflective. The case measures 36mm in diameter (not including the crown) by 41mm lug-to-lug, by 10mm thick (including the crystal). It is fitted with a seventeen jewel, Swiss ETA 2750 which was a revolutionary type of movement that was manufactured with fewer components, which made it tougher, so less could go wrong. Added to that is the fact that it has a larger mainspring barrel that gives it a 50-hour running time compared to the standard 30-hour longevity. The Caliber 649 Movement beats at 21,600 BPH and is therefore more accurate than the standard 18,000 BPH. The MOD specified the use of this movement and Hamilton put their fine-tuning to work, making it even better. It was a real "workhorse!" It has a tonneau-shaped case that was the standard issue for the RAF, Army, and Navy, from 1973 to 1980. This particular watch was an Army-issue that is identical to the Navy and RAF watches. The black dial bears the Hamilton signature, the circled "T" indicates the lume is tritium (although no longer glowing) and the "Broad Arrow" indicates that it was the property of the Crown and finally "Swiss Made" indicating the origin of the movement. Make sure you notice the "Gladiator Style" sword hands... they give it a real "Warrior" look. It has the typical, solid and fixed bars which are welded into place, making them super secure. We have fitted it with a very nice black NATO band, just like the original. What's not to like here? Nothing! This handsome watch can be yours... just give us a call to reserve it for you. Our one-year warranty for parts and labor will allow you to buy with complete abandon! 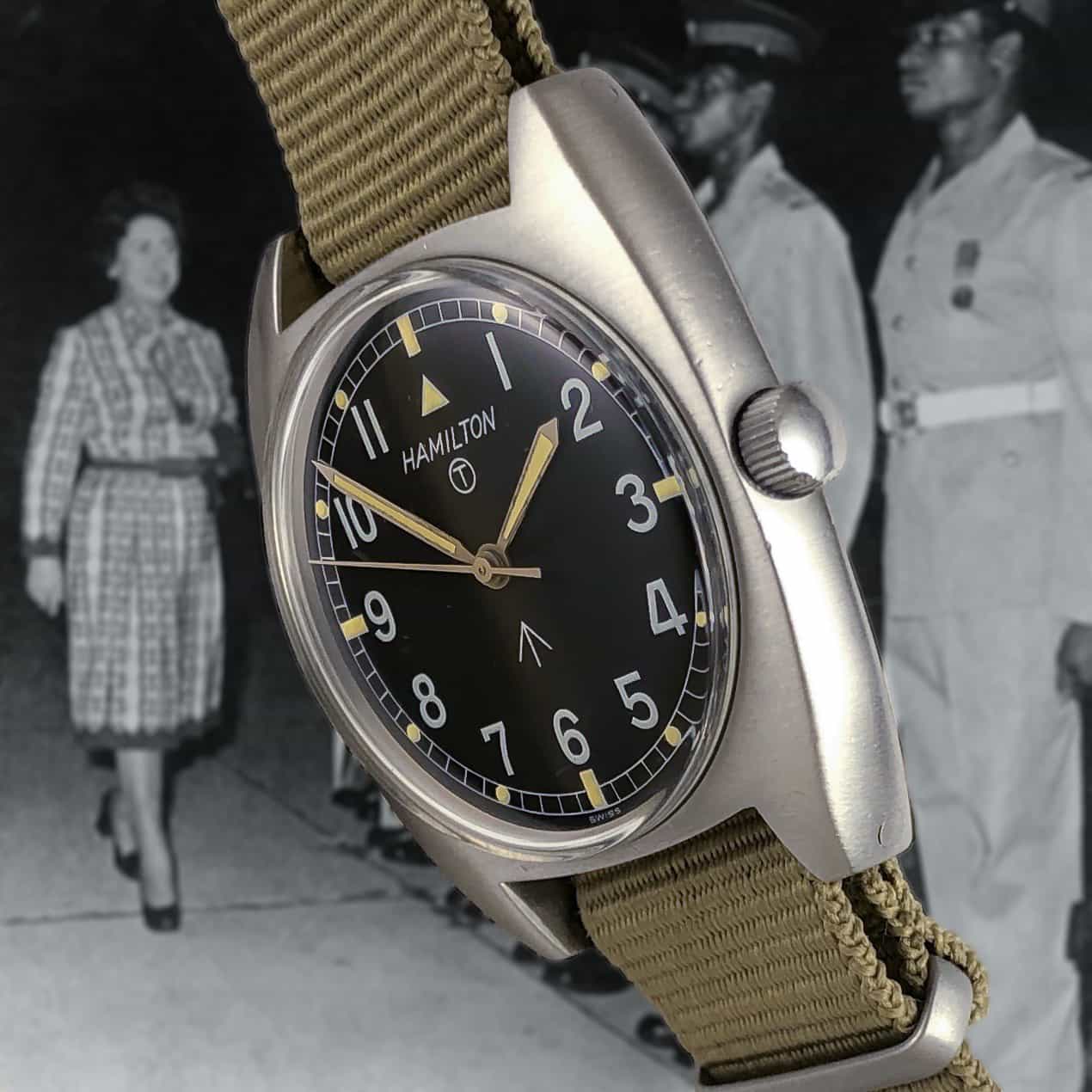 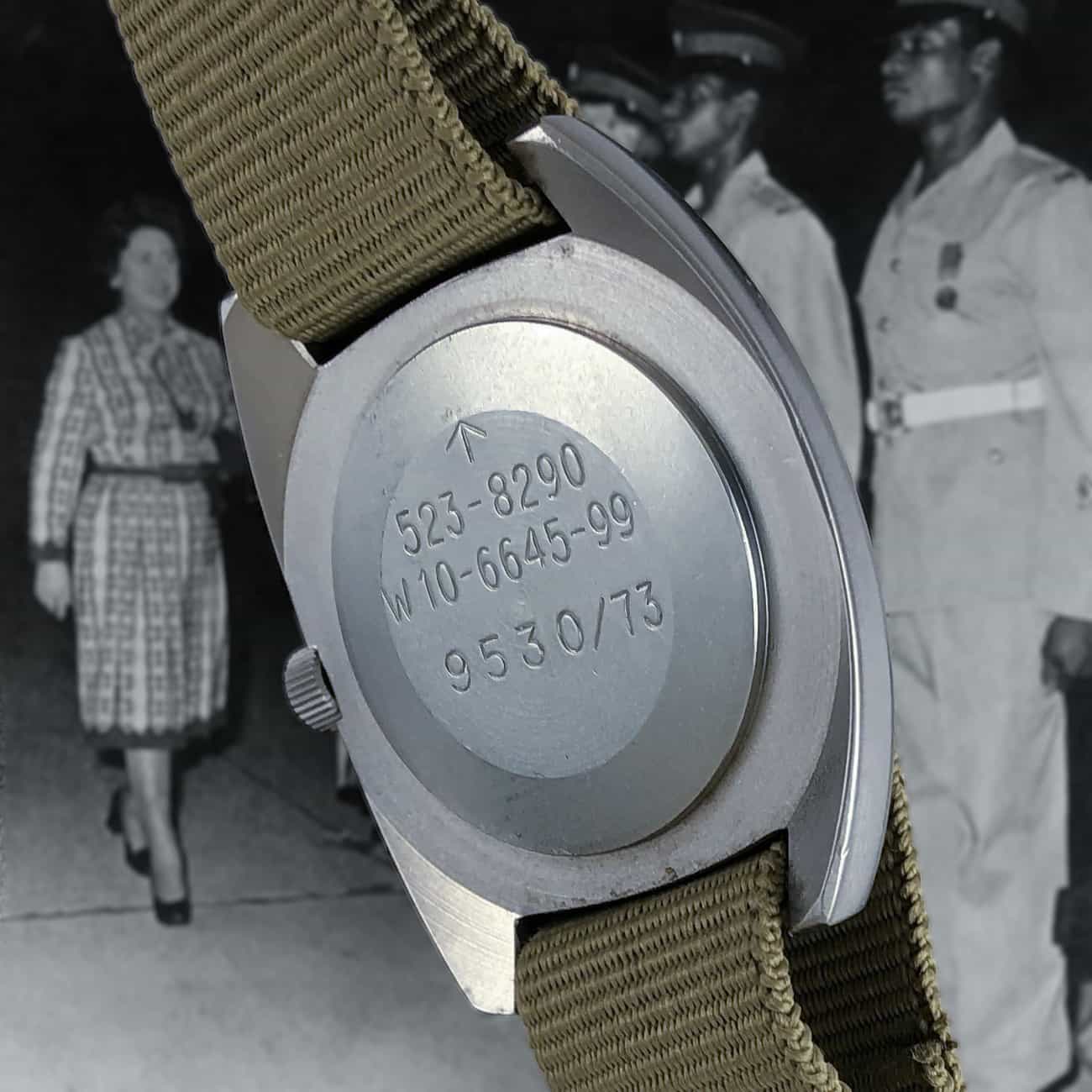